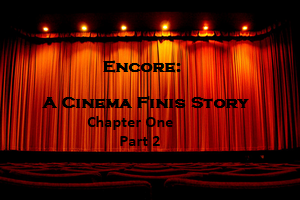 The Manager left the musicians to their preparations and headed toward his office to await the new reel.  The arrival of the first new feature that Cinema Finis was premiering was imminent and for some reason the expectation carried with it a sense of dread.  He left the theater proper, walked through the lobby past the concessions and headed for a door marked "Employees Only!"

"Employees only?" He said aloud to himself, "Try employee only!"

There used to be many employees.  Now all the familiar faces had gone.  Over the years crowds began to dwindle as the majesty of the cinema experience began to be replaced by the convenience of video stores, movie channels and streaming services.

Thus, the theater had been experiencing a long and slow death right up until the day Mr. Legion and his..."investors" had arrived.  By that time he had been alone trying to hold it all together. There had been many names and faces in and out of the theater over the years..but it seemed like so few memories.   He must be getting old he thought as he tried to concentrate to have a proper memory...then one came.

The most recent ushers Chris and Janet had gone and the concession girls Kassy and Eva soon thereafter. The box office manager Susie had left some time ago as well.  He had been struggling in futility on his own for a while when at the last moment on the last day at the last hour Mr. Legion appeared.

His memory began to clear as he recalled that moment.  A shudder and a flash of light; he had thought one of the ceiling lights had blown but it had not come from above but from behind him.  That side door that no one had used for years had burst open and the shadowy figure approaching, Mr. Legion emerging from the light, briefcase in hand and documents prepared.

As he shook the memory from his mind he returned to the present and opened his office door. He saw the decayed and faded label on his door which read "Manager's Office."   He opened the creaky door, went around the now chipped and worn oak desk that sat in the center of his office and dropped into the once pristine but now squeaky and worn leather chair.  The repetitive, long squeaks of the chair lulled him, and his memory again began to wander to the recent...or was it the distant past.

He had so little time, but he allowed himself a moment’s contemplation, a moment’s thought, a moment to breathe.  He felt as if he hadn't had a real breath for ages.

He closed his eyes.  "Just for a moment," he said to himself as he gently rocked back and forth in the chair.

..the commencement ceremony of the opening of the theater.  It seemed like yesterday and a hundred years ago all at the same time.  He thought about his door he had just walked through. He remembered the day the label on his newly furnished door was attached to the clean frosted glass.  He remembered the way the gentleman with the suspenders and red bow-tie had smiled as he glued those bright red letters on.  He remembered the way that gentleman polished the glass, took a step back and and took in his work with a look of absolute reverence and satisfaction.  He even remembered the name of the man as it was sewn on to his company shirt...Sam.

With a bang he was snapped out of his day dream.  The bang had been caused by the giant film reel that had been dropped on the desk.  It was a wonder that the desk didn't crack under the weight it.

"There be the first reel."  A women's voice said, deep and powerful with an accent he couldn't quite place.  "You are expecting it, yes?"

"Yes...yes I am," he replied, still slightly stunned from being pried from his daydream, "for some time now. Thank you."

"I know you have been," she said with a slight chuckle as if she knew some inside joke he had not been privy to.   "Go on den, sir. Take it...to the projector room."  She said with urgency as she began to turn and walk out the door.  "It premieres tonight yes?"

Her colorful flowing dress was red and she wore a white shawl over her head with what looked like a yellow lily on it.  She continued down the hall and called back to him.

"Yours is an important role Mister.  Ha-ha!" She laughed.  “You da projector man...da movie man...get dem across, yes?"  She disappeared down the hallway and was gone.

He wasn't quite sure what this meant but he stood and began to prepare to bring the reel up to the projector room for the midnight showing.  Get them across?  He let go of the question and looked at the clock on the wall which had stopped long ago but his habit was such that he continued to check it.  His next instinct was to check his wrist for the watch that he no longer wore.

He struggled down the hallway with the heavy film reel canister and headed down another corridor that led to an old metal staircase leading to the projector room.  Having made this walk countless times he began humming a familiar tune but the name of it eluded him.  How many times had he made this ascent to the projector room? A hundred?  A thousand?  Who knew?  Walking the primrose path was the old joke back in the day, describing this particular duty.  The familiar clang of shoes on metal stairs rang in his ears.  The projector room was small and had a strangely green glow to it that surprised him.  He had not yet been up here since the..."acquisition."  Or had he?

He pushed the thought from his mind and began the familiar task of removing the reel from the canister and loading it onto the projector.  He mounted the reel onto the first spool, threaded the first foot of film did a bit of tinkering and it was ready. Then as if on cue a chime sounded and began to strike.  It startled him and he turned to see a large grandfather clock, both hands at the twelve.  He didn't remember that being there before.  It was beautiful and terrifying and the chiming seemingly began to intensify as it repeated and repeated.

On the twelfth chime he instinctively switched the projector on.  The old thing had started up like it was new and he watched the beautiful sight of the film being magically pulled from one reel, through the projector housing, across the lens and light, only to be reassembled on the spool on the other side.  It was a simple and beautiful thing and as he listened to the familiar click of the projector, he heard Mr. Samael's musicians in their loft began to play a haunting melody.

"Ticket's Please!" a voice shouted from below and the doors were thrown open.  From his vantage point he could see the white light from the lobby spill into the darkened theater, its beam falling just short of the last row of seats.  A crowd of shadowy figures began to file in, their forms and details hidden by the shadows and the darkness.  The lobby light cast their shadows across the theater chairs into grotesque shapes, their forms being distorted by the combined light and darkness.

The beautiful chaos of a cinema door being opened to a large group of eager film goers had begun and the lilting piece of music seemed to usher them all to their seats in a visual poetry that mystified the Theater Manager watching it all from the perch of the projector room.

"The movie is about to begin," came another announcement.  The beautiful piece being played from the loft seemed to be winding to a close.  The second spool was starting to thicken with film as the preview finished and the countdown to the main feature begun.

He looked over at the table where the now empty canister that had housed the reel lay partially open.

Fixed to the top of the metal cover was a title card that was upside down from his point of view. He reached over and spun the canister around to read the title of the feature he had just...unleashed on the crowd below.

It was a one word title.